Oh ISO, you tricky little acronym you.  If ISO is as alien to you as UFO, hang tight, you’re about to understand why it’s so important and why it’s the FIRST thing I set on my camera as I’m setting up a shot.

Definition: ISO is the abbreviation for the International Organization of Standardization, a governing body based in Europe that provides the standards for a wide variety of subjects.

Yes, that’s really what it stands for! Gives no insight whatsoever into what it is…simply makes you sound smart at a dinner party. Moving on…

For the Techie in You: ISO is the setting that tells the sensor (the light collector) in your camera how sensitive to be to the light.  Of the three main settings (ISO, Shutter Speed and Aperture) ISO is the toughest concept to grasp because ‘changing sensitivity’ can be such an arbitrary explanation. For practical application, think of it as setting the scene specifically related to lighting, you’re telling your camera how light or dark it is around you.

If you happen to be of the film generation, you’ll remember that you would have to choose a ‘speed’ when purchasing your film.  Some of the packages even had pictures on them (a sun, clouds, etc) to help you pick the right speed. The lower the number, the less sensitive the film and the finer the grain in your photo (higher definition). Well, ISO is the digital equivalent to film speed (not to be confused with Shutter Speed which we’ll get to later). The ISO settings on most DSLR’s (aka Big Girl Camera) typically start at 100 and depending on the age and cost of your camera will go up to 1600+. Even some smartphone camera apps have ISO settings now.

A low ISO setting (100, 200…) simply put, means that your camera’s sensor will be less sensitive. Because of the availability of lots of light, the sensor can relax and not be so sensitive.

Lots of Light = Choose Lower Number = Less sensitive = Finer Grains = Clearly Defined (think HDTV). You should set it to one of these low settings when you are outside in bright light.

On the contrary, when it’s cloudy out or if you’re shooting indoors, you’ll want to bump up your ISO. When you do this your sensor will literally be more ‘sensitive’ to the light.

Here’s an example of how the lighting changes with the same photos shot at 5 different ISO settings.  I kept everything else the same, just the ISO changed:

***Shot indoors, during the day with window light

ISO 400 is the ideal setting here. ISO 800 isn’t terrible but you start to lose a little definition and quality to the characters. This is why it’s not as simple as just cranking your ISO up as high as you want. There’s a reason that you’ll hear ‘lighting is everything’ from every photographer everywhere. If you raise your ISO too high you risk ‘noise’ (which is the equivalent to ‘grain’ in film). Basically it means your picture will be less defined, lower in quality (because it’s been made with those larger grains).

This first example of noise is a photo I took at my daughter’s first school play. It was in the school auditorium at night and the low lighting caused me to have to raise my ISO. It was actually set at 4000 which seems very high but I was using my super big girl camera on this one and not my Rebel. Typically, the more expensive the camera, the better it takes in every spec of light without a negative affect on the picture.

You can see how her skin looks ‘speckled’ or more appropriately ‘grainy’. That’s noise. 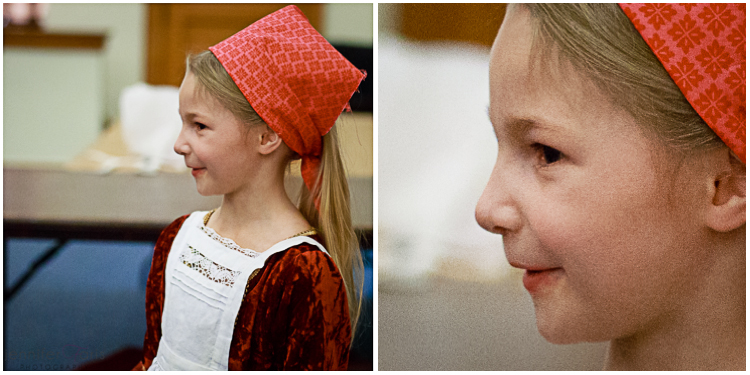 This next picture of my husband and son was taken in a restaurant at night and like the previous photo the ISO was set at 4000.  You can’t tell too much when the photo is zoomed out but close up the noise is definitely there (as well as some food on the corner of his mouth). 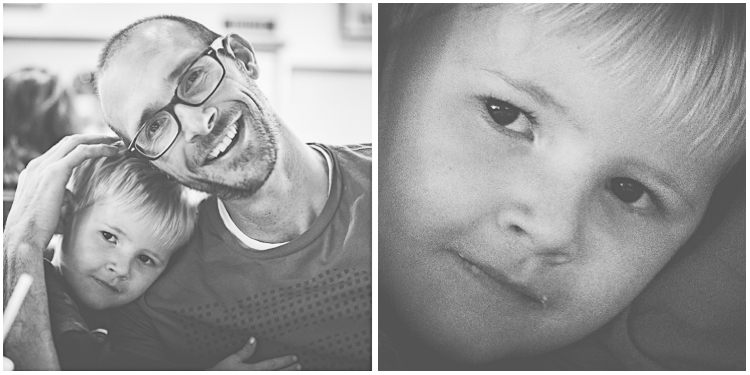 As you start to practice with your ISO settings don’t be too afraid of noise.  Sometimes it can actually add character to the picture! Regardless, we’ll go over tips and tricks to reduce noise in a future session so for now just keep shooting and trying out different ISO settings.

By setting your ISO, you’re informing your camera of the available light in your surroundings. So first and foremost, before you even turn your camera on, look around and determine what kind of lighting you have. Are you outside in the middle of a sunny day?  Is it an overcast early morning? Are you inside near windows? Are you in your living room at night? Your answer will help you determine at what number you want to set your ISO.

Now go ahead and turn your camera on and make sure it’s in manual mode (don’t be scared!) The ISO button will be in a slightly different location depending on your camera make and model (for some it may even be in your menu) but setting it should be the same.  Just hold down the button and scroll with either your wheel or your arrows until you get to the number you want. Remember, you can always change your setting so don’t be shy with experimenting. Meanwhile, here’s a cheat sheet to get you started: 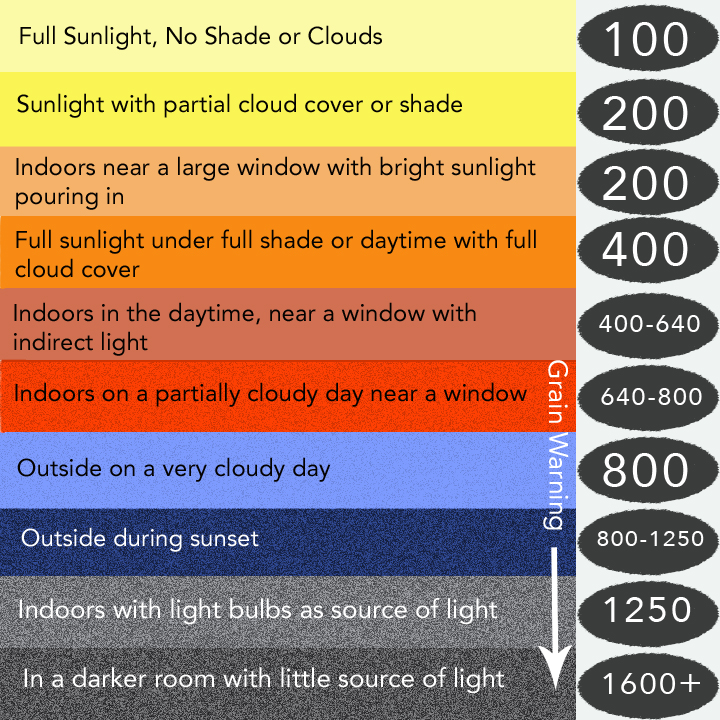 Take a shot and then adjust your ISO. Take another shot and repeat.  It doesn’t matter if your shot is good, I just want you to see how changing your ISO affects the light in your photo.

Thats it!  You did it. Now you can move on to aperture/f-stop…

ISO in a nutshell

Share the love or save this article for later and Pin here: 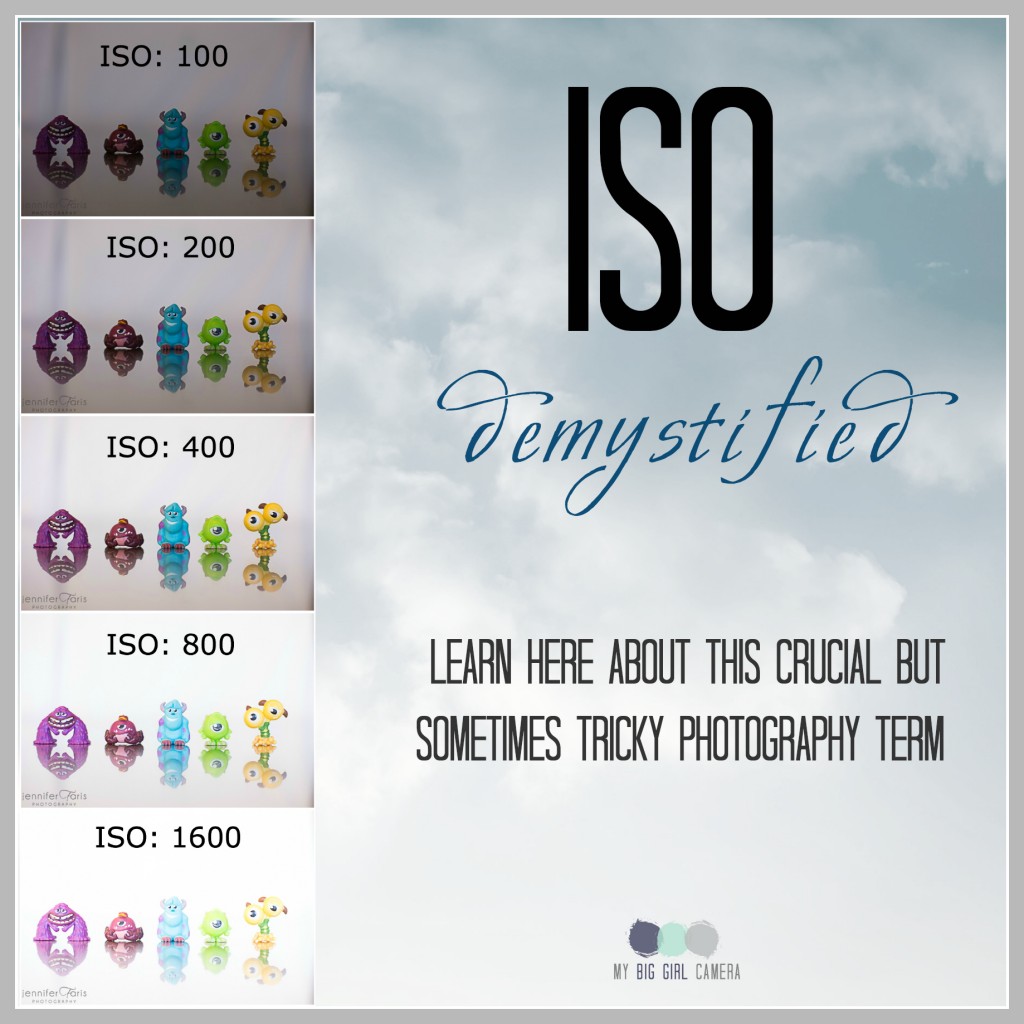